I saw this on pinterest and thought it was a little bit genius. I love pasta but sometimes it can feel like a  big old bowl of mixed together monotony. Sure it tastes great but every mouthful is the same and it’s the same everytime you make it. Well I suppose you could make a lasagna or a cannelloni, or throw it all out the window and make a salad. But then why not just jazz it up, turn it 90 degrees and call it honeycomb cannelloni! It’s a little tricky, a little fiddly but so long as you chop all of the ingredients smaller than the diameter of your tubes it will all fall into place. The sauce is rich and flavoursome thanks to the chorizo and sundried tomatoes while the crunchy tops of the cannelloni tubes add a nice texture compared to the average bowl of penne. Topped with melted cheese which falls down into the cracks, this is a fun and fancy dish which takes no longer than your average lasagna.

In the same saucepan add 1 extra tablespoon of olive oil and saute the onion for a minute then add carrot and sundried tomato and after another minute add the fresh tomato. If all added at once too much water is let into the pan simultaneously. Saute for 5 mins then add the tinned tomatoes and spinach and cook for a few mins until the spinach has wilted. Add the fresh basil, olives, paprika, cayenne and a little pepper, then add the cooked chorizo. Bring to a boil and then lower the heat to a simmer and cook for half an hour.

Now for the dish itself. Preheat the oven to 180C. In a baking dish that just fits all cannelloni tubes add two generous ladles of the sauce or until about 1/3 full. Line up your cannelloni tubes in the pan, then add sauce slowly to ensure the tubes fill up evenly. Add any of the remaining sauce over the tubes and around the sides to have an even coating. Then top generously with cheeses!

Bake in the oven for 30-35 mins, until the pasta is cooked through and the cheese is browned and crispy on top. I served this with a green salad (which was mostly ignored as usual!)

Or a prettier version of a similar Jamie Oliver recipe thanks to Fork & Story: 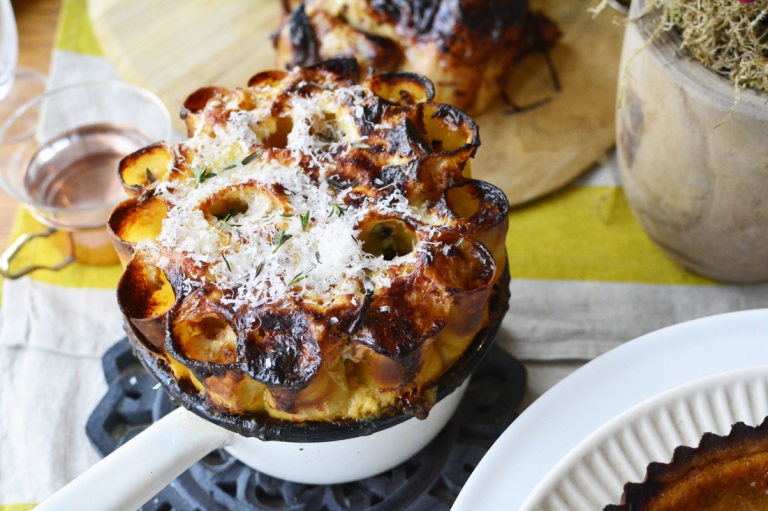 3 thoughts on “Honeycomb Cannelloni with Chorizo and Basil”