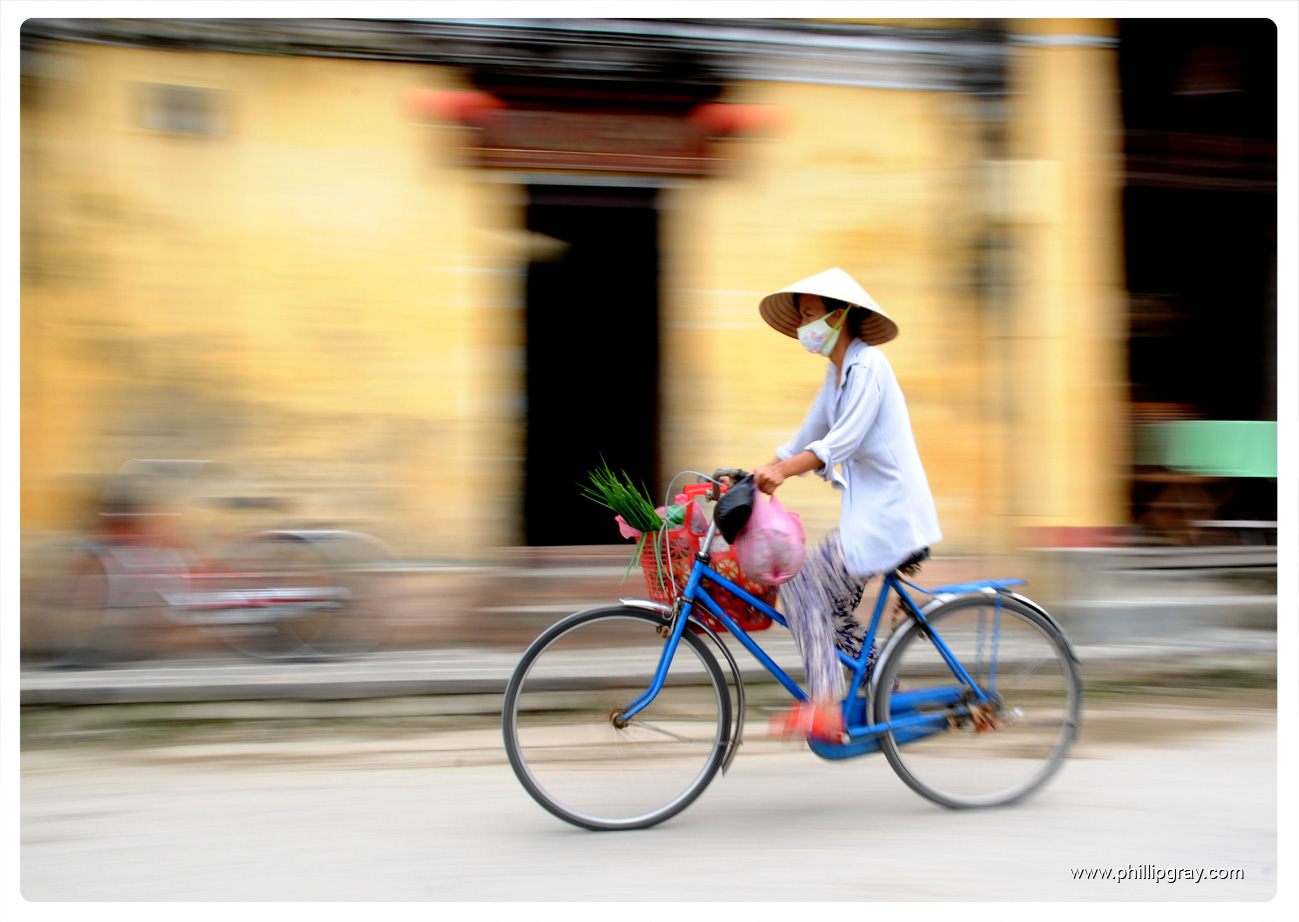 South East Asia is one of the most diverse, exciting, fun, cheap and ridiculous places on Earth. It’s hard not to fall in love with the food, people and eclectic culture, watching the variety ever-changing as you travel from country to country. A very normal day on tour could consist of waking up on a train, grabbing an iced coffee, chatting to an elephant, meeting people from all over the world and watching chanting monks as the sunsets. Actually that was pretty much the agenda in Chiang Mai. What I’m saying is there is something for everyone, it can be done DIY or on a tour, alone or as a group, slowly to soak it in or never settling in one place for more than a day. It’s easy, cheap and you will have the time of your life.

Here are my top tips for travelling, taken from my 2 month trip around Thailand, Laos, Vietnam and Cambodia:

Get off the beaten track – The track is always a good place to start. I have no regrets about starting my travels on a G Adventures tour for 3 weeks through Northern Thailand, Laos and down through Vietnam. Laos especially is difficult to navigate and, as I was travelling alone, it was just…easy. I barely looked at the itinerary, we just rocked up and everything was planned. That said, the following 5 weeks were exciting and spontaneous. If we wanted to stay somewhere we just stayed (hence 2 weeks on Koh Tao!) But even on the tour we had ‘optional time’ in which we went cycling and buffalo riding in Hoi An, visited the Chiang Mai Elephant Sanctuary or just had a well-earned nap by the pool! 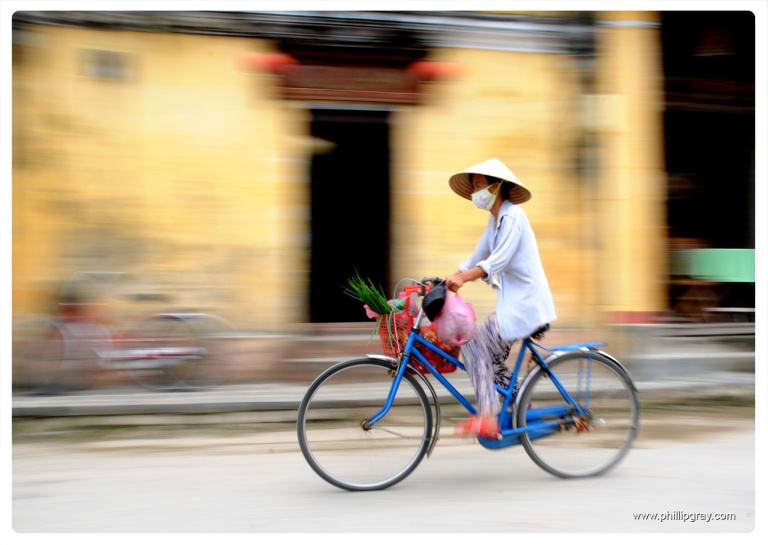 But don’t care if something is ‘typical tourist trail’ – Who cares right? Yes, everyone goes to Thailand and everyone you know took that selfie on Phi Phi, met an elephant and went tubing with a bucket in hand. There’s often a reason something is ‘typical tourist’…it’s really really fun. Things don’t often become popular for no reason. And you’re on holiday, have fun and don’t give a monkey’s if you’re not the first, original person to do so. Okay rant over, sorry about that.

Hostels aren’t always the best option – A contentious topic, as the benefits of any accommodation depend on the person. If you’re travelling alone, a dorm will always be cheapest, you’ll easily meet an array great, like-minded people, but you are definitely not guaranteed a good night’s sleep. The quality of hostels also vary depending on the city/country and you can’t always rely on the idea of ‘you get what you pay for’ (however in Cambodia, don’t be fooled, everywhere is cheap, the Prince D’Ankor (below) was a steal!). I found that checking tripadvisor and hostelworld reviews worked well but the best was to just ask fellow backpackers for their own experiences.

However, if you’re travelling as a pair (like my brother and I) we realised that a twin room was often the same price as two beds in a hostel. We had to make more of an effort to meet people in bars etc. but we slept well, with control of the aircon and who walked in drunk and noisy. It totally depends, also a double room is often cheaper than a twin so if possible, bring your boyfriend!! 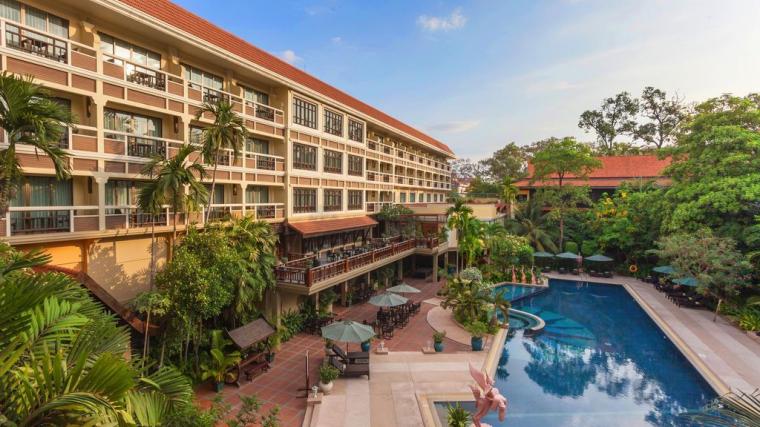 Try to respect the local culture – I am currently guilty of a bikini tan. This was my first ever beach holiday and I had a duty to the tourism world (and my ridicuous paleness) to make the most of the beautiful sunshine. but lounging in a bikini on Koh Tao’s Sairee Beach was the norm, heck it was odd if you had clothes on. However, this isn’t the case everywhere in South East Asia, despite many tourists expectations. I especially noticed this around Kuang Si Waterfalls in Laos. It’s one of the most beautiful places I visited, with several sacred sites amongst the toursity areas. 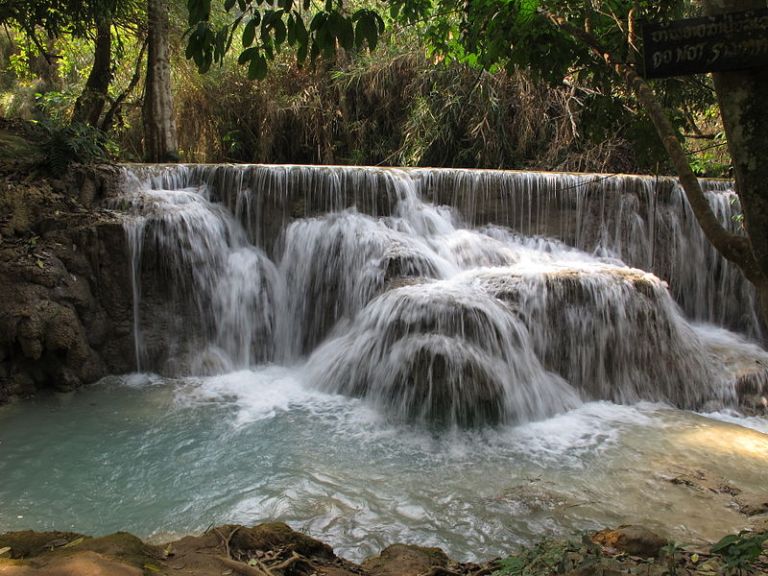 The main falls comprise of a 60 metres cascade after which the water collects in numerous turquoise blue swimming pools as it flows downstream. The Laotian people are quite modest and tourism hasn’t long been in the area compared to Thailand and Vietnam, hence we were encouraged to keep tops on while we swam. No probs. Yet many people were in the tiniest bikinis, often stared at by locals, while one couple even seems to be getting it on in the water, oblivious to many points and stares! Its not hard to cover up sometimes, you’re not gonna catch a tan on a temple day anyway right?

If you want something, buy it! It’s too cheap not to!!! I was on a student budget so I was no shopaholic while travelling but when you’re somewhere that cool, cheap and diverse, YOLO. You paid £500 to fly there, buy the funky trousers. Due to my budget I tried to buy souvenirs that reflected the local traditions and crafts. In Luang Prabang I bought a silk scarf, in Hanoi a much-needed NorthFace jacket, in Hoi An a lantern and a handmade, tailored dress and on Koh Tao I bought my mum a pearl bracelet. All of which cost a smidge of the cost in England so no regrets. Even when I add it up, its marginal, and I had fun looking, talking to the local people and buying from them. 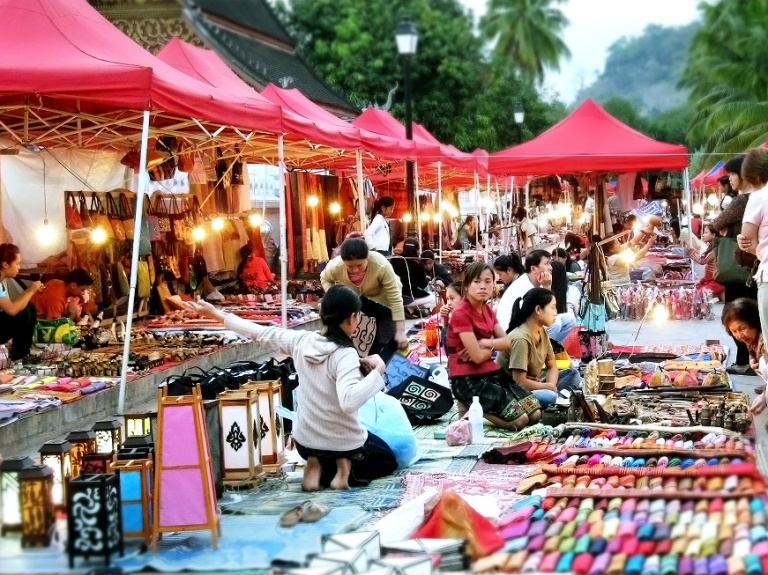 Pre-book some of your travel – While on the road (I think trying to figure out the best way from Siem Reap in Cambodia to the Thai islands) my brother and I found out that not everything can be booked the night before. In fact in most cases flights are your best choice for last minute booking. As can be seen on 12go.asia, the most popular booking site, as well as the official Thai Railways website (less user friendly), you must book at least 3 days ahead but ideally less than 60 days ahead.  They’ll take bookings more than 60 days ahead but you can only buy tickets when the State Railways of Thailand open bookings. However, especially in the low season you can rely on the fact that SOMETHING will be available to book at the train or bus station on the day, but maybe not what you were hoping for. We arrived in Bangkok hoping to take the overnight train and ferry to Koh Tao that night and we ended up on the nastiest train with no air con, getting off at 3am to wait 2 hours in mosquito heaven for a bus to the ferry port. Not ideal, but still, we got there and for about £20 each! Plus we saw this sunrise on the boat… 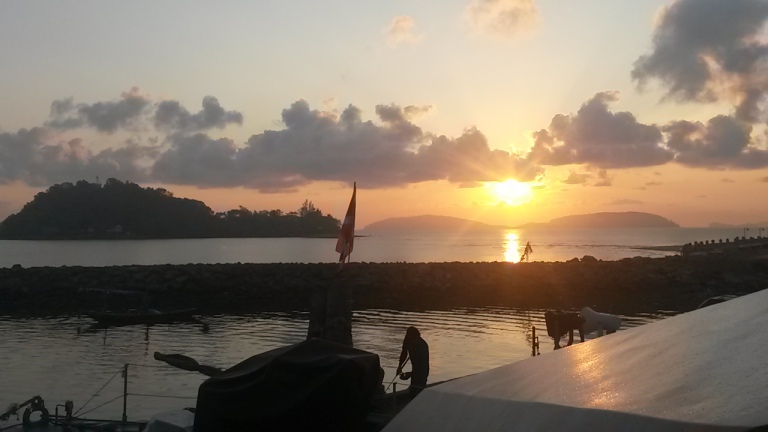 Try everything once – this applies to everything; exotic foods, crazy experiences, wacky alcoholic concoctions, even temples! Fulfil every silly dream and spontaneous whim. In South East Asia it has probably been done before by the last fun-loving tourist, no-one will ever judge and whatever it is it will most likely cost significantly less than doing it at home. So take the sunrise balloon flight, get your scuba diving qualification and try the deep-fried tarantula -it won’t kill you. 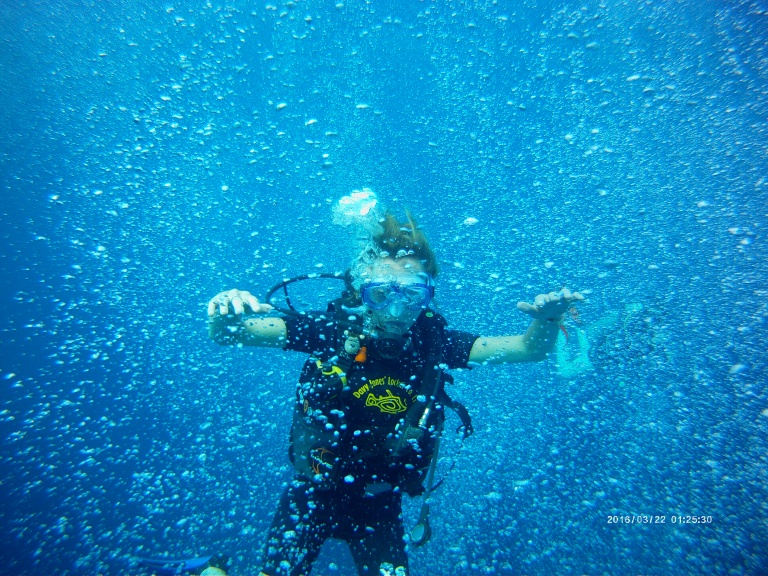 Respect the sun…and the bugs…and the tap water… – Oooh Asia, so many bugs. However DEET does work. My sensitive skin isn’t a great fan but I wasn’t eaten as much as predicted. The worst time is definitely sunrise (and maybe sunset) but keep some good bug spray to hand and it’s manageable. Okay, next, I don’t want to scare anyone off but if you’re planning on travelling South East Asia for the first time, you are bound to get ill somehow. I’m not talking anything drastic like malaria, I mean a stomach bug, or a cold, or food poisoning. Everything is different out there, from the humidity to the extent of the car fumes. The tap water isn’t clean and many restaurants don’t wash the salads in the bottled stuff. Fried food is safe, as is being a vegetarian but where’s the fun in that? Given time everyone’s stomach becomes accustomed and then you can really experience the fantastic food. I threw myself into street food heaven from day 1 and was generally fine. From the 50p street-side buffets of Luang Prabang to my favourite Green Papaya Salad in Hoi An, street food was the best! *Also to save money buy beer and snacks at the 7-Eleven rather than a restaurant, a Chang and a toastie for £1…yes please? 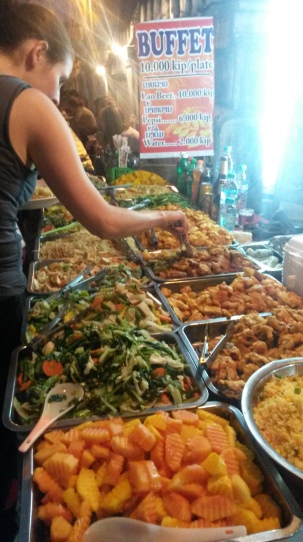 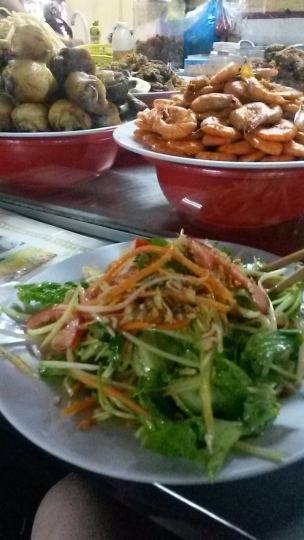 The sun can be fierce! Especially for a very pale English gal in early February. A combination of this, air-con and constantly running around enjoying yourself can lead to some serious dehydration. It took a morning of kayaking in strong Laotian sun to teach me this! I mean I do look a little…too relaxed. Great fun though!!! 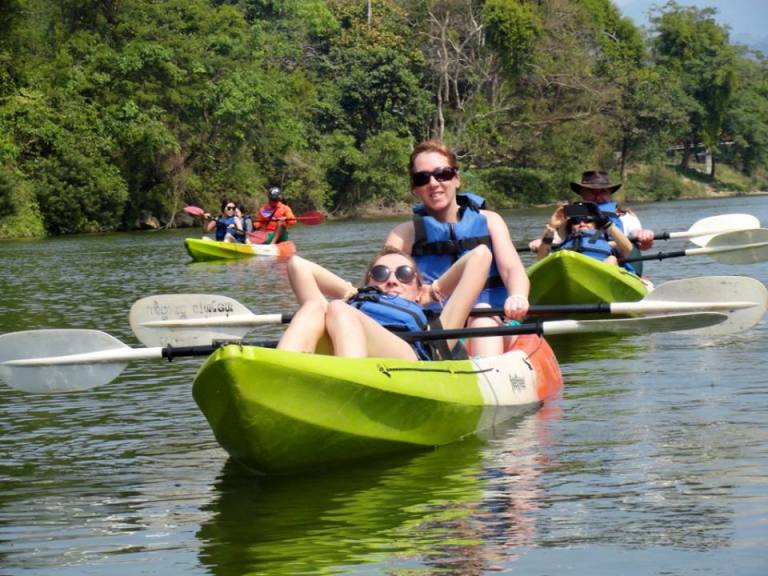 Trust the locals, but also use some common sense – Many locals rely on the tourism industry, so at the end of the day, they need people to keep coming back and often really enjoy having a cheeky chat with the tourists, either for the fun of it or to practice their English. I met so many fantastic people that genuinely wanted to help me but equally not everyone was so lovely. First off, always insist on a taxi-meter. By law in Thailand taxi drivers should always put the meter on but they rarely so, often asking for extortionate amounts at the destination. Either meter it, or agree on a price before setting off. Secondly, buy a combined train/bus and boat ticket. The agent will then give you an unofficial-looking piece of paper as a ticket which actually is legit, they just don’t have printers I guess. Finally, chat. I’ll never forget the receptionist at out final hotel, she was absolutely lovely, wanted to help and genuinely appreciated us taking the time of day, while most people hurried around and spoke quite bluntly to her. I wish I took her picture.

Don’t pack too much – My final tip. I really didn’t pack much, 10.1kg to be precise. My Low Alpine Voyager 65l backpack was fully compression-strapped up when I left – so much shopping space!! I still took too many clothes. The heavier the bag the more you hate it when leaping off a train or hiking it up the huge hill to the hotel. Shopping room is a nice thing to have even if you don’t use it. Almost every toiletry can be bought there (except tampons are expensive I must say). Pharmacies are insanely well-stocked and in the end, given time you just don’t need more than the essentials. You just have fun 🙂